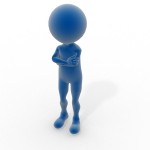 A few years ago, I happened to have two students who were both quite tall and who had lessons scheduled one right after the other on the same morning.

Jack (not his real name) was in his late thirties, not very athletic, and was the director of a local charity. Bill was a former college football player in his mid-twenties who now worked as a computer programmer.

Jack was a classic “sloucher”; he typically sat and stood with his shoulders pulled down into his chest, his head poked forward and down. Bill tended to over straighten his back in an exaggerated “at-attention” style often seen in the military.

Both men came for Alexander Technique lessons because of back pain. Jack had been told that surgery was his best hope and Bill relied on weekly visits to a chiropractor who could help him with his symptoms but not with the underlying pattern that was causing those symptoms.

It was a fascinating experience for me to work with these two students over a period of several months. When I first gently guided Jack into a less slumped posture, his immediate reaction was: “I can’t walk into my office looking like this!”

“Because people would think I was arrogant!”

It turned out that Jack had been quite tall for his age most of his life and that somewhere along the way he’d got the message (from his parents? teachers? playmates?) that taking up his full size would give others the impression he was trying to act superior. His personally was by nature fairly quiet and unassuming and I suppose he didn’t want to deal with the challenges he thought his natural posture might have invited.

Bill was quite a different story. During his first lesson, I asked him to go into a slouch. With a little help from me, he was able to let go of some of his overly stiff stance. It was by no stretch of the imagination a slouch -although it felt that way to Bill. His immediate reaction was that this new way of standing was quite unacceptable – “I feel like a wimp!” was his reaction.

It turned out that his father was an ex-marine and a policeman. When we took a look at photos of him, and of Bill at various points in his life, it was clear that he had copied the military bearing of his father – as had his two older brothers.

Both these men had adapted postural patterns that were quite harmful over the long haul. And while it was fairly easy to coax them out of those patterns for a short period of time, their perceptions about these charges strongly encouraged them to revert back to their habitual patterns.

They illustrate something that every teacher of the Alexander Technique encounters: A person’s habitual patterns of sitting, standing and moving often feel “right” and any change – even one that is clearly beneficial – feels “wrong”.

You can probably think of people you know who have quite pronounced irregularities in their posture that everybody around them can easily notice – perhaps standing and sitting in ways that are very asymmetrical, of with very slumped shoulders, with one shoulder carried much higher than the other. Yet the chances are good that those people are completely unaware of their patterns.

With Jack and Bill, one of the ways I was able to help them “recalibrate” their self-perceptions was to stand them in front of a full length mirror, with a second mirror positioned so that they can see themselves from the side. I would then help them to release the extra muscle tension they were using to hold themselves in their habitual ways of standing and take a look at themselves sideways, imagining they had never seen this person before.

It didn’t take long for them to clearly see that their sense perceptions didn’t match their visual observations. After a few lessons, I asked them to make those same changes on their own in front of someone they trusted – in this case it was their wives – to get additional feedback, which confirmed their observations with the mirrors.

Both Jack and Bill had lessons over a period of about 4 months and by the end of that time, both had let go of most of their postural “holds”. Neither complained of back pain anymore. But some of the most rewarding changes occurred in other areas of their lives.

Jack found that his new physical bearing was not seen as arrogant at all, but did seem to encourage greater respect from his colleagues. Bill discovered that he was now perceived as being much more approachable. One of his co-workers actually told him that she used to be terrified of asking him for help but now felt comfortable doing so.

The next time you’re in a clothing store with mirrors set up letting you see yourself from the side, spend a few minutes taking a fresh look at yourself. Drop any concern about the usual reasons for using a mirror – your hair, your make-up, the fit of your clothes – and just take in the way this “stranger” stands and compare it to what it feels like.

You might make some very important and useful discoveries about yourself!

Introducing a new Facebook Group for anyone with an interest in the Alexander Technique.
Click here to join!

Other ways to support this site

The Complete Guide to the Alexander Technique